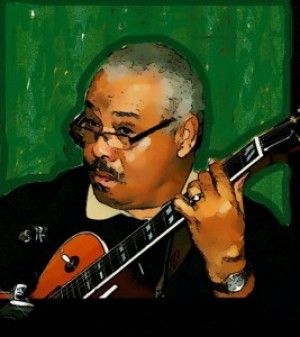 George J. Gilliam began his musical journey at only 13 years of age, in Gary, Indiana.   Since then he’s developed into a seasoned musical director, producer and extremely talented jazz guitarist. With little experience, Wilson Crump hired this enthusiastic young player to perform with the Mellow Tones.  He later moved to Chicago with his family and formed his own groups.  “The Rocking Soul Brothers” became a Chicago success when he teamed up with Hashan Khan, Darnel Hagen and a little unknown vocalist named Chaka Khan.  Jerry and the Chantells was next, using his nick name for this group.  His talents quickly became known at the famous Regal Theatre Talent shows, television appearances and shows throughout Chicago.  George worked with many talents like Rom Lee and Jerry Wilson.   George’s father Ira H. Gilliam, was a successful saxophonist and encouraged him to stretch his skills.  He formed a Big Band featuring Jimmy Ellis, Bill Yancey, and Willie Pickins.  They debuted at the Saber Room in Hickory Hills and became another Chicago favorite.

George carried his instinctive talent to Xavier University in New Orleans. At Xavier, George played guitar for the Xavier University Jazz Band, where a young Wynton Marsalis was just beginning his career.  Under the direction of Dr. John E. Fernandez, George sees this as one of the most memorable times of his life.  He performed with some of New Orleans biggest talents such as, the Nevelle Brothers, Luther Kent and Trick Bag.  He made regular appearances at The New Orleans Jazz Heritage Festivals every year.  While earning his bachelors degree in music, he found a steady niche with the renowned James Rivers Band, more recently featured in Clint Eastwood’s film, “The Bridges of Madison County”.   James bragged of George’s natural skills to play the blues.  It’s no wonder he asked him to tour with the group to South America.  After graduating George headed for California to pursue his true love….jazz.

He strove to build on his talent in the jazz vein and once again formed his own bands.  His style became smooth, distinctive and uniquely classic.  It was in California that he discovered an aspiring vocalist and soulmate, Elena, who he later married.  Her style is inspired by Shirley Bassie, Sarah Vaughn and Ella Fitzgerald, making Elena and George a perfect pair, who have performed together ever since.  George has been a regular at jazz festivals over the years.  “George Gilliam subtly changes dynamics and adds fills with sweet, well-timed chording.” Commented Bill Kohlhaase from the LA Times, about the Hyatt Newporter Jazz Festival. With the Count Basie All-Stars at the Marriott Resort, George showed “effortless chord progressions” said Rydznski from World News.  George insists on surrounding himself with great musicians.  Among the many talents have been Kevin Toney, Albert “Tootie” Heath, Harold Land Jr., Richard Reed, Donald Dean, Louis Spears, Larry Van Nash, Henry Franklin and more!  All the while, his talent and style have evolved into an outstanding guitarist who appeals to any audience.  Weather he excites you with an energetic modern jazz feel or mellows your soul with rich relaxing tones; you’ll love his “special touch” on the guitar.  Most recently George performs with his own jazz trio.  This smooth guitar trio takes you on a journey with his CDs, Stepping Lightly, featuring Donald Dean on Drums and Donnell Lambert on upright bass and Many Roads Home featuring George with Michael Saucier on bass and Donald Littleton on drums. You’ll surely enjoy the ride.

George’s talent is only matched by his sense of community.  After earning another degree as a music therapist, he dedicated himself to working with developmentally disabled adults.  Through his clinical studies at Metropolitan State Hospital in Norwalk, Huntington School in Long Beach, and the Betty Clooney Center for Brain Injured in Long Beach California, he developed skills to work with a wide variety of special needs adults.  His talents were so keen, that immediately after becoming a therapist, he was hired as the Director of Hope University in Anaheim, California by its founder, Mrs. Doris Walker.  Working with Mrs. Walker as an intern, she envisioned that George could become her replacement at Hope.  An expert and known author in her field, she knew he was the right choice even with very little experience.  After serving as Director for Hope, George soon became determined to develop his own program and founded Creative Identity, where he utilizes the arts “to enrich the lives of those who have been forgotten”.  George has an intuitive ability to sense individual needs and desires of special needs individuals and believes that everyone can contribute to society and have a fulfilling life.  He has strived for the past 25 years to keep his students involved through the arts.

George’s gift is apparent whether working with special needs clients or entertaining his audience through music.  George is truly a talented guitarist with a genuine love for music, expressed sincerely in his performances.  He promises to deliver a passionate creative style tantamount to a true seasoned professional.